All Pokémon cards fall into one of two categories: Japanese, and all other languages. There are many differences between Japanese and English cards, some of which are widely unknown by collectors, too. Even the value of a card will be different if it is Japanese, as opposed to English, and for so many reasons. In this article, we compare Japanese vs. English cards and break down all the differences to understand why one is worth more than the other.

We’re going to start off by looking at the monetary gap between the two types of cards.

As you may already know, Japanese Pokémon cards are often less expensive than their English counterparts, especially vintage. Japanese cards are of higher quality, this means that they are less likely to receive damage or be destroyed over time. As a result of this, vintage Japanese cards are more plentiful and less rare.

Modern Japanese cards are also less expensive than English, but for different reasons. First of all, rare Pokémon cards are just easier to pull from Japanese packs. While Japanese packs no longer guarantee a foil card, booster boxes do guarantee hits and the pull rate for ultra rares are higher in general.

English-speaking people want English cards, so there is less demand for Japanese cards. In fact, some of the most sought-after cards (Shadowless) are English only.

Another point to consider is the trading card game. The rules state that each player’s deck must be made up entirely of one language. If one is playing the TCG in an English-speaking country, they will probably require English cards. This means that the USA, Canada, UK, and Australia all require English cards for play. This places a high demand on English cards that are especially useful in the TCG.

Japanese cards are beneficial for collectors, but useless to players. To add to this point, only English packs come with code cards that are redeemable for a digital booster pack in the online TCG.

When grading cards, the Japanese usually receive higher grades due to the superior quality. Therefore, an English PSA 10 will be more valuable since there are fewer of them.

Japanese Pokémon cards are usually cheaper than English because:

However, some Japanese cards can be more expensive because: 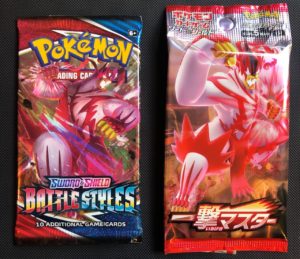 Aesthetically, Japanese and English cards have many differences. Beginning in 1999, English cards got a refresh after experiencing a rough entry into the North American market. This led to various improvements to the card’s design such as shadows around the illustration box, more vivid coloring, and bolder font.

Updating the design of the card has been a frequent occurrence in the Pokémon TCG. Sometimes both Japanese and English experience design updates, sometimes just one.

Of course, English Pokémon cards have a different back than the Japanese cards do. Japanese cards actually have two backs, after being updated in 2001.

Modern Japanese cards have exclusive reverse holo patterns that English cards do not have. Each Japanese expansion has a unique reverse holo.

One of the most notable changes out of Japan would be the silver borders. Japanese Pokémon cards switched from yellow borders to silver/grey borders with the Black & White era in December 2010. Some holo cards now included silver foil borders as well. 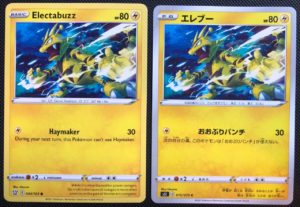 It’s commonly known that Japanese cards are of higher quality, grade higher, and have fewer misprints.

Pokémon card quality in North America is bad. Unfortunately, we’ve seen a drastic decrease in quality since 2020, when the demand for cards sky-rocketed. However, Japanese cards remained the same as they were before- near perfect.

It’s easy to assess card quality if we look at standard grading sub-categories. These include Corners, Edges, Surface, and Centering.

Surface: Hold the card below a lighting source and slowly move it, focusing on the reflection. If the card is straight from a booster pack, you’ll primarily be checking for print lines. A print line is a straight line often across the foil area of the card. Print lines have become much more common in the past year. Also check for any blemishes, ink dots, or other printing errors.

Corners: The corners of a Pokémon card should be perfectly round and symmetrical, with no raised edges. The corner should be smooth, without any jagged cuts.

Edges: The edges of the card should be smooth, leaving no evidence of a dull blade. A dull blade will often result in a rough edge, with burrs along the cut.

Centering: Most Pokémon cards have a yellow border, but they will sometimes have other variations such as GX cards, which have a silver border with a black line going through it. The border should be perfectly even all around the card. It is easiest to spot an off-center card by looking at the corners of the border, then checking the width of the border from left to right, then top to bottom.

Even though Japanese cards are of higher quality, they are actually thinner. It is easy to feel if you have both cards side-by-side. This could be due to the fact that Japanese cards don’t sell as much as English cards do, so a thinner card would cut down production costs.

Some collectors prefer Japanese to English, and one of those reasons is that Japanese cards release months earlier than their English counterparts do.

In 2021, The Pokémon Company broke all records when they reported that 3.7 billion cards were sold. In addition to this, Shiny Star V was the most sold product on eBay Japan. North America buys far more Pokémon cards than Japan, and we even bought a considerable amount of Japanese cards in 2021, too.

Non-Japanese products tend to have a lot more cards in them, on average. For example, English booster packs have 10 cards and Japanese boosters only have 5. We all tend to get more booster packs in our collection boxes, and our booster boxes have 36 packs instead of Japan’s 10 packs per box.

Why So Many Differences?

Pokémon cards have been around for over 25 years, and the Pokémon company has spent this time experimenting and collecting data on their products and how they sell in different regions.

This kind of data manifests itself in ways of booster pack artwork, card prices, vast market fluctuations, and exclusive cards.

The most notable reason why the two markets vary so much is probably so collectors have even more products to collect. If someone really loves a particular card or Pokémon, they will likely collect both English and Japanese versions.

Many cards are never printed in English, even though they receive a Japanese release. While this is sometimes true in reverse (Like Base Set 2), Japan receives way more exclusive cards than the rest of the world.

This is where prices tend to get out of control, as fewer cards are produced and demand is high because half the market is missing out and forced to import the exclusive cards.

A great example here is the recent Japan Post promotional cards. Two very beautiful and unique Pokémon cards were made exclusively for sale at Japanese post offices. Not very many were produced, and the second-hand market such as eBay absolutely exploded with inflated prices on the day of release.

Many Japan promo cards end up being in an English expansion set months later. This can be bittersweet. This can drastically increase the price of a card, but at least we get it in English.

Pokémon cards are a product of Japanese culture, so it’s hard to complain when they get exclusives. But English cards fall far behind in the aesthetics column due to toned-down holo patterns, yellow borders, and poor quality control. Overall, it is important to collect what you want to collect. There are many differences between Japanese and English Pokémon cards, but an impressive collection will have a blend of both, and maybe even other languages.