Black Lotus: Everything you Need to Know (Price Guide)

Black Lotus: Everything you Need to Know (Price Guide)

The Black Lotus is one of the most iconic cards in Magic: The Gathering (MTG). It has seen print three times with a history that goes back to the beginning of the game. This article aims to provide all the information you’ll need to know about this powerful card! In addition, we will provide a price guide so you know if you are getting a good deal or not.

What is the Black Lotus MTG Card?

Black Lotus is one of the most iconic and sought-after Magic: The Gathering cards in the world. It’s also one of the game’s most valuable cards. But, what exactly is the Black Lotus card, and what makes it so valuable? Read on to find out everything you need to know about the Black Lotus MTG card.

Black Lotus was first printed in the Limited Edition Alpha set in 1993, and was last printed in the Unlimited set later in 1993. The card is a rare artifact that allows you to add three mana of any one color to your mana pool by sacrificing it. This effect is incredibly powerful and has helped power some of the most successful decks in Magic history.

Adding three mana of any color to your mana pool can allow you as a player to gain an incredible, often insurmountable, advantage over your opponent. Especially as Black Lotus’s mana value of 0 allows you to use it on your very first turn. Having this much mana on your first turn allows you to increase the speed of your game plan. Your opponent will have a very hard time keeping up without a Black Lotus of their own.

Black Lotus is an incredibly rare card. There are only around 1,100 copies in existence, and many of those are owned by collectors or players who have no intention of ever selling them. This card is extremely versatile and can be played in a wide variety of decks, though it has been banned or restricted in most formats due to the raw power it adds to your deck. Black Lotus is an iconic piece of MTG history and is highly sought-after by both players and collectors alike.

Can you Still Play the Black Lotus?

The Black Lotus was first printed in 1993 and was actually reprinted several times that same year. A lot fewer cards were printed then compared to now due to Magic as a game still being in its infancy. It’s considered by many to be the best card in the game, and its price reflects that. A single Black Lotus can sell for thousands of dollars.

But, what if you want to play with a Black Lotus? Is it still possible to find them and use them in your games?

The answer is yes, but it’s not going to be easy or cheap. Black Lotus is currently banned in all official formats of Magic: The Gathering, except for Vintage and Commander, though you’re probably not going to find many people playing Black Lotus in Commander, even at the highest levels of play. That means if you want to play with a Black Lotus, you’ll need to find other people who are also interested in playing Vintage games. Even in Vintage, Black Lotus is “restricted” which means you can only have one copy of it in your deck.

There are a few ways to go about finding Vintage games. One is to attend large Magic: The Gathering events like Grand Prix tournaments or MagicFest conventions. These events usually have a Vintage side event where players can compete using their Vintage decks.

Another way to find Vintage games is to look online. There are some online communities dedicated to playing older forms of Magic: The Gathering, such as Vintage. These players usually organize games through forums or Discord servers. A forum you may want to check out is reddit.com/r/MTGVintage. There is also Vintage on Magic: The Gathering Online (MTGO), the precursor to Arena, that is still quite active due to catering to players who want to play older formats, like Vintage.

How Many Black Lotus Cards Exist?

It’s estimated that there are around 5000 Black Lotus cards that still exist. However, this number is functionally impossible to confirm. The vast majority of these are in the hands of collectors and are not available for sale. A small number of Black Lotus cards have been auctioned off over the years, with prices ranging from $15,000 to $116,000. One even sold on eBay for a ludicrous $511,100 in 2021, though such a high price can easily be considered an outlier.

Non-tournament legal Black Lotus cards can be purchased for around $5000. These were printed in the gold-bordered Collector’s Edition, also released in 1993, though not sold in traditional packs. The fact that people are willing to pay so much for a card they can’t play in official tournaments goes a long way to showing the prestige of simply having a Black Lotus of any kind in your collection.

Why is the Black Lotus so Expensive?

There are a few reasons for the relatively high price tag on the Black Lotus. Firstly, it is a rare card that was only printed in limited quantities. Secondly, it is a very powerful card that can be used to create some serious advantages in the game. Lastly, the Black Lotus has a high level of collector’s value due to its rarity and desirability.

While the number of Black Lotus cards in existence is relatively small, there are a few things that can impact the value of individual cards. The condition of the card, whether it’s been signed by the artist, and whether it comes with its original packaging can all play a role in determining how much a Black Lotus is worth.

If you are looking to add the Black Lotus to your collection, be prepared to pay a hefty price tag. However, the Black Lotus is definitely a card worth investing in if you are serious about playing Magic: The Gathering.

While its price tag reflects that, there are other Lotus (something that signifies a similar effect of generating either mana for free or three mana of the same color) cards out there that are much more affordable. Here’s a look at some of the other Lotus cards available:

Now that you know about some of the other Lotus cards available, you can decide which one is right for you. Just remember that the most powerful and expensive card is the Black Lotus.

Blacker Lotus is a silver border card printed in the Unglued set of cards in 1998. These cards are not tournament-legal and, in fact, were intended as a light-hearted joke by the design team of Magic: The Gathering for players to use in more casual games. As a reference to how powerful the original Black Lotus ended up being, you could use Blacker Lotus to get four mana but you had to tear the card into pieces. Obviously, this was never intended as a serious card, but as a joke about how expensive and powerful the original Black Lotus is. 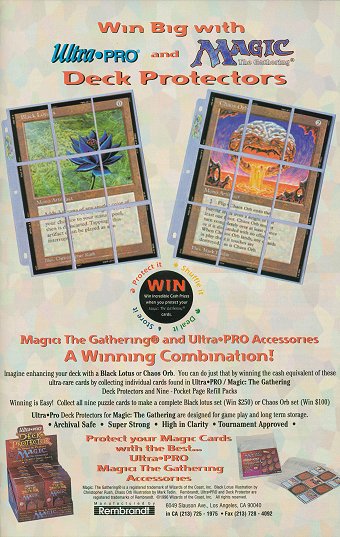 Ultra Pro Puzzle Quest Black Lotus is a promotion from 1996 by the company Ultra Pro, best known for their protective gear (card sleeves and deck boxes, etc.) for card games such as Magic: The Gathering. In 1996 Ultra Pro used something called the “Black Lotus Quest” to try and boost sales of their products. Pieces of an oversized Black Lotus (and one other card, Chaos Orb) were included randomly in some boxes of card sleeves and nine-pocket card binder pages.

Anyone who managed to collect all nine pieces of the oversized cards could send them to Ultra Pro and win $250 (or $100 in the case of the Chaos Orb). While these pieces are far less valuable, at around $100 each, they are considered rare in their own right since only 3 of the complete oversized Black Lotuses are known to exist.

The only thing that keeps them from being more expensive is their literal worthlessness as game pieces for actually playing Magic: The Gathering.

There is one other way to play with this powerful and expensive Magic: The Gathering, though it can’t exactly be called “getting your hands on it.” In 2014 there was a set released called Vintage Masters, designed to support the Vintage format and players’ ability to actually play with the powerful decks in this format.

It included Black Lotus and even featured new art for the card. However, this set was not released as physical cards. It was released digitally on the Magic: The Gathering Online (MTGO) platform which is used for playing Magic: The Gathering online with other players and has been around a lot longer than Arena.

The platform has remained relevant by supporting play in formats you can’t play on Arena, like Legacy and Vintage. If playing Vintage, or Black Lotus specifically is something you want to do, MTGO might be a way to do it.

As you can see, the Black Lotus is a very powerful and rare card. If you are lucky enough to get your hands on one, you should definitely hold onto it as its worth will only increase! The price of this iconic card can only go up if you keep it in good condition, so make sure you know the price of this extremely rare piece of Magic: The Gathering history. With that said, we hope this guide has helped you understand everything you need to know about the Black Lotus.