The biggest set of 2021 and possibly the most hyped set in recent history was Celebrations. Celebrations was The Pokémon Companies’ way of celebrating 25 years of Pokémon. The set was an amazing treat for players and collectors as the set only contained 50 cards, keeping pull rates high and the ability to complete the set actually doable.

The 50 card set contained a subset of 25 cards, so half of the Celebrations set was dubbed the “Classic Collection”, featuring reprints of popular cards from the TCG’s past. The Classic Collection contained almost all of the set’s chase cards, and was far more difficult to complete than the other 25 cards. Today we’re having a look at the best cards from Celebrations, including the most expensive cards and why they cost so much. 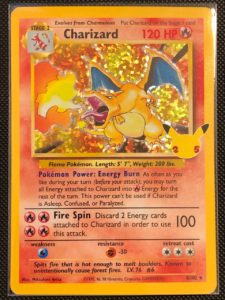 It should be no surprise that Charizard sits atop the list. Some collectors choose to frown upon Charizard reprints these days, knowing that they often drive customers to purchase more products, but the Celebrations Classic Collection is all about amazing cards from the past, so Charizard was a must.

This card is the most expensive form of the set and will remain that way for a long time, if not forever. It isn’t an exact reprint of the 1999 Base Set Charizard but has some slight differences.

Yes, only slight differences, but noteworthy as well. The Zard card is cool, and that is why it is number one on the list. 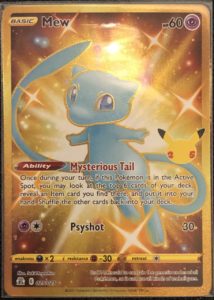 Mew is the only card on this list that isn’t part of the Classic Collection because it’s the only card with any value outside of the subset. Many collectors report this card as difficult to pull, which isn’t surprising since it is a gold card.

If you noticed, Mew is illustrated as a blue Pokémon on this card, when everyone knows Mew is usually pink. This is a shiny depiction of Mew, which makes the card so much cooler. There are a few shiny Mew cards from the TCG’s past, but this is the first to be printed in a long time and the first full art of its kind. 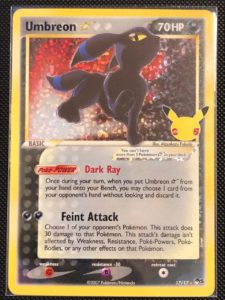 The gold star cards were from the EX era of the Pokémon TCG, first appearing in the expansion EX Team Rocket Returns, in 2004. These were extremely rare cards and as a result, are worth top dollar today. These gold star cards featured shiny Pokémon, which added to the hype. The promotional card that was included in the Celebrations ETBs was a gold star Greninja.

Of the gold star cards, Umbreon was one of the most sought-after. It was a powerful and versatile card in the TCG and visually stunning as well. The card is almost an exact reprint of the original, but features detailed etching over the face and, of course, the Pikachu stamp.

Once again shiny Pokémon make an appearance! “Shining” Pokémon were first introduced in the Neo Revelation expansion in 2001, with two secret rares: Shining Magikarp and Shining Gyarados. The Magikarp quickly won the popularity contest and to this day is a highly sought-after card.

The Celebrations reprint of Shining Magikarp is one of the biggest chase cards from the set and pulls hard on that nostalgia from 2001. 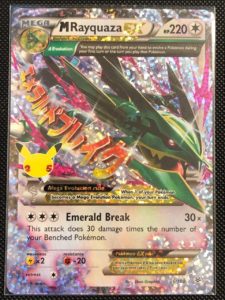 The M EX cards were first introduced with the XY era of the TCG. For the first time, Pokémon had mega-evolutions and this helped shaped the TCG into what we play today.

M Rayquaza EX is the 5th on this list as it is the 5th most valuable card from the set. It really is an impactful card with the Japanese script dynamically stretching across the illustration box, with Rayquaza breaking the bounds of the box itself. These cards have a lot going on, and adding etching to the cluttered design was an awesome choice for so many reasons.

Celebrations was an awesome set, and even though it had now come and gone, most of us won’t forget this one. From a Poké investor’s perspective, this set is probably a good one to watch. The long print run and small set size have resulted in a fairly stable market for the set’s 50 cards and promos. And as always, Charizards are a good idea as they always eventually go up in value.