You’ve probably got one or more McDonald’s Pokémon cards before you right now, wondering what they are worth. Some are rarer than others and many are worthless. However, a select few are very valuable. We’re going to break down the different McDonald’s cards and clearly outline the value and prices.

How Much Are McDonald’s Pokémon Cards Worth?

There’s no simple answer here because there are over 100 Mcdonald’s cards, each with a different value. We recently published an article listing every single Mcdonald’s card to date, so you can quickly reference your cards to see what year and set they came from.

The Most Valuable McDonald’s Cards

How to Get McDonald’s Pokémon Cards?

If McDonald’s is currently running a Pokémon card campaign, all you have to do is simply stop by a participating McDonald’s restaurant and order a Happy Meal. It helps if you specifically ask for the Pokémon cards since they sometimes have a second toy available at the same time.

But there are other ways of getting cards without ordering a Happy Meal. In a perfect world, everyone would just order Happy Meals and receive one toy with their meal, allowing for fair distribution among customers and especially kids. Unfortunately, the details of distribution are up to the restaurant manager’s discretion.

When the 25th anniversary Pokémon cards were available at McDonald’s in 2021, many McDonald’s managers chose to simply sell the cards by the case on a first-come-first-serve basis. This of course is strongly frowned upon, but it still happened. Furthermore, some managers implemented a limit per person but most did not. Many locations allowed the customer to purchase as many booster packs as they wanted as long as it was accompanied by the purchase of at least one Happy Meal. 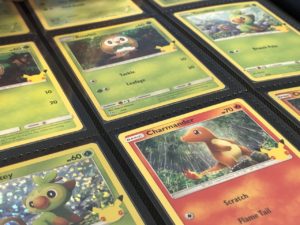 When Will McDonald’s Have Pokémon Cards Again?

There is no clear pattern for when McDonald’s decides to run another Pokémon campaign, however, after the success of their 2021 run (tied together with the Celebrations special set), we can probably expect another one soon.

McDonald’s employees and even managers usually don’t have information on this type of thing long before the general public does, so it is best to follow McDonald’s and The Pokémon Company on Twitter to watch for an announcement.

When an announcement does come around, it’s quite common for the public to get more than a month’s notice. It is unlikely that the cards will suddenly be out one day without warning.

McDonald’s Pokémon cards are their own little niched within the hobby, being made up of multiple small collections. Some, admittedly, aren’t very appealing while other sets consist of some truly beautiful cards. Since these sets run for such a short period of time, they often pass under the radar unnoticed, resulting in some hidden gems as the years pass on. Even if the cards aren’t valuable when they release, they probably will be in ten years.