Second to only Charizard, Blastoise is the most sought-after card from the 1999 Base Set. A 1st edition Blastoise can sell for tens of thousands if it’s in mint condition. However, since Blastoise is such a fan favorite, he has been made into multiple chase cards over the decades. Today, we rank these Blastoise cards and analyze the prices! 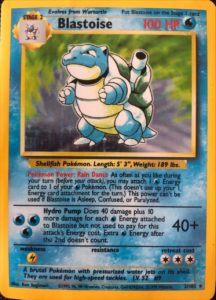 Number one on the list is the original 1999 Base Set Blastoise. How could it not be? Pokémon Red Version and Blue Version came out just a few months earlier than the cards and had kids everywhere debating between Charizard and Blastoise. As we all know, Charizard came out on top as the chase card, but Blastoise was and is still a close second.

The card itself is beautiful and nostalgic for many of us but has lately become too pricey for many collectors. If you do really want to purchase one, your best bet would be the unlimited version.

The first print of Base Set in 1999 had a ‘1st EDITION’ stamp on each card. They didn’t print very many of these, so the rarity alone makes them much more desirable. Furthermore, Base Set has ‘Shadowless’ cards.

Shortly after the first few runs of the original set, the cards went through a refresh due to low popularity. The refresh added more vivid coloring, bolder font, and a shadow for the illustration box. The easiest way to determine if a Base Set card is pre-refresh is to look for the shadow. If it is missing, it is a ‘shadowless’ card.

While the Base Set 1999 Blastoise sits atop the list, the number one spot truly belongs to the incredibly rare and expensive 1st edition shadowless Blastoise. This card is sought-after by every collector, but most of us may only dream of it, as PSA reports that only 100 exist.

Some PSA 10 1st edition shadowless Blastoise cards have been sold at auction for $40,000+. 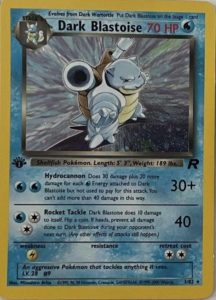 The Team Rocket expansion came out in 2000 and featured many amazing cards with the “Dark” prefix before the Pokémon’s name, indicating that they were on Team Rocket, or at least villainous in some way. While many of these cards are highly expensive today, Dark Blastoise is the second most sought-after card of the set, next to (you guessed it) Dark Charizard. But even Dark Blastoise is worth triple digits!

Once again, Dark Blastoise was available with the famous 1st edition stamp. This card would be an absolute gem to own! A PSA 10 copy of this card was recently sold on eBay for ~$4,000.00. Even the non-holo is pricey, fetching $310.00 at a recent auction for a PSA 10. 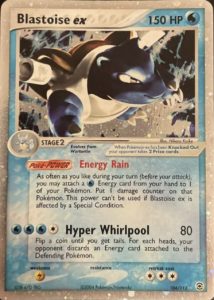 EX cards were the chase cards from the EX Ruby & Sapphire era, first released in 2003. Many EX cards were made, and today many of them are incredibly expensive. They are easily recognized by their sparkling silver border and unique artwork.

The Blastoise EX is highly desirable since it is so unique and powerful in the TCG. Blastoise didn’t actually get an EX card of its own until the following expansion, FireRed & LeafGreen, in 2004. A raw near mint copy of this card costs around $400.00 on tcgplayer.com.

The EX cards continued for years, with the occasional refresh. This Blastoise EX was printed as the 122nd XY promo card and is arguably one of the best promos from the XY era. The attention to detail on this card really shines when one notices the Gyarados and Vaporeon in the background.

Delta Species cards are some of the most unique in the entire history of the Pokémon TCG. Delta Species Pokémon are metal type, mixed with one other type. This Blastoise, for example, is metal/fighting type. This neat aspect plus the dynamic holo pattern of the card, results in some highly sought-after cardboard! 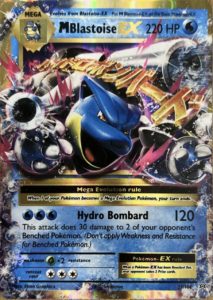 This card was first released in the XY Base Set but was reprinted in the Evolutions set shortly after, with a small refresh. M Blastoise EX is a great card for anyone’s collection because of its stunning artwork. Blastoise appears to be lunging forward out of the illustration box, with Japanese scripture overhead reading “Hydro Bombard”.

Both the XY Base and Evolutions prints can be found in near-mint condition for about $20.00. That’s a pretty good deal. 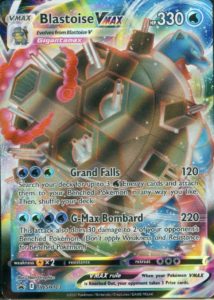 Next up is another recently released Blastoise, but a unique one. This is the only Blastoise card featuring the Pokémon turned around, with its shell being the main focus… And it’s awesome. This Is the Gigantamax version of Blastoise, so it has multiple cannons protruding from all over its shell.

This card was available exclusively as a promo, included in a V collection box for the Sword & Shield expansion. Luckily, a near-mint copy can be bought for about $20.00. 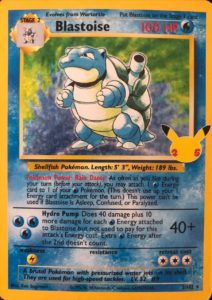 The Celebrations collection was quite possibly the most hyped expansion the Pokémon community had seen since Evolutions. From the moment that we found out the original ‘Big Three’ were getting reprints, people went bonkers. Luckily, since the set featured only 50 cards, the pulls were relatively easy.

Blastoise wasn’t difficult to pull and seeing the original artwork again was electrifying. Only this time, the card was updated with a fantastic etched pattern all over the face, and a 25th Anniversary Pikachu stamp on the card. 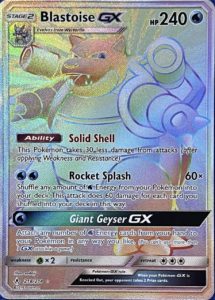 Rainbow cards just hit differently when you pull one. They glimmer in the light and refract the full spectrum of color, truly highlighting the beauty of the Pokémon on the card. That’s why the Blastoise GX rainbow rare is such an expensive card. You won’t find a near mint copy for under $100.00 today, and that’s pretty good for a modern card. This Blastoise made an impact on the first-gen collectors out there. 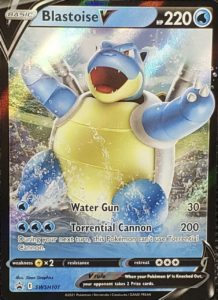 V cards are beautiful high-gloss cards featuring artwork across the entire card. They aren’t rare, and that fact has undersold V cards to a degree. A lot of them are very pretty, and when the Pokémon is one of your favorites, it’s hard to pass up.

In the case of Blastoise V, the artwork isn’t that special and the card isn’t that good in the TCG. However, it’s a nice Blastoise card and it deserves to be recognized as one! Once again, this card is affordable at only $10.00 for a near mint copy. 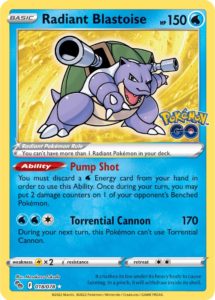 The upcoming special expansion to the TCG is set to release on July 1st, 2022, and features Pokémon from the mobile game Pokémon Go. This set will include ‘Radiant’ Pokémon, which are this era’s shiny cards.

That’s right, we’re getting a shiny Blastoise- Radiant Blastoise. The card has now been confirmed by The Pokémon Company.

Check it out here. This is truly one of the coolest Pokémon cards ever graded and likely one-of-a-kind. The card was made in 1998 and served as a test for the English print Pokémon cards that would not be released in North America until the following year.

Many argue between Charizard, Blastoise, and Venusaur. But why do we have to choose when Blastoise is obviously the best? Just kidding. But really, we should learn to appreciate all Pokémon and maybe then we can understand why so many cards are so sought-after by collectors. Blastoise is an O.G. Pokémon and carries bucket-loads of nostalgia when presented in its original artwork.  If you haven’t yet started your own Blastoise collection, we encourage you to start! As you saw, many beautiful Blastoise cards are affordable.

*All prices in this article were calculated using recent eBay sold listings, tcgplayer.com, and the official PSA website. Due to natural market fluctuations and events, prices will vary over time.