There seems to be a lot in store for the Pokémon TCG in 2023 as fresh news keeps coming in after the end of the 2022 World Pokémon Championships. With the highly anticipated Pokémon: Scarlet & Violet Series all set to release, players all over the world are excited to see what comes next.

The new series plans to reintroduce the classic ‘EX’ cards with an enticing new makeover. For those of you who are relatively new to the game, Ex cards were first introduced to the Pokémon TCG all the way back in 2003 with Ex Ruby and Sapphire. These EX cards had greater than normal hp and were quite powerful in many regards. The catch is that whenever you knock out an EX, you would get two prize cards in return.

According to the latest updates, the reinstated EX cards aren’t just about their crystalline aesthetics and improved visuals but they also boast powerful attacks and high hp like their previous variants. Any Stage 1 and Stage 2 evolutions will have the EX variant incorporated into them. Stage 2 cards especially would be able to turn the tide of battle with a single attack, it has been said.

In a press release after the 2022 Pokémon Championship, it was stated that the Scarlet & Violet series will focus greatly on ‘comebacks’ and card types such as Trainers, Energy as well as others will be molded according to the theme. In addition to this, many other trademark mechanisms from the EX-era such as Mega evolutions and Dynamax will also be incorporated into the cards. 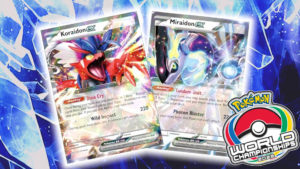 Overall, the announcement of the Scarlet & Violet series has built a fair bit of hype around it and it is quite safe to say that cards from this series will be dominating the Pokemon TCG in 2023. There is still a lot that remains to be announced and there is some speculation surrounding some of the cards but it is believed that many sought-after and valuable cards are set to release next year.

With this in mind, we have a list of the 6 Pokémon cards that are likely to dominate the TCG in 2023. Not a lot of information has been released about these cards, but their significance in the next expansion has already been solidified.

One of the very first cards to be revealed in the trailer for the new Scarlet & Violet series, Koraidon is an extremely powerful legendary unit that is set to be one of the most valuable cards in the upcoming expansion. As the new expansion is set to expand the game as the new standard for the Pokémon TCG, one can only assume the impact that legendary cards like these will have in the future.

Koraidon’s Dino Cry ability enables the player to attach up to two Basic Energy cards from their discard pile to a Basic Pokémon, ending the turn. Moreover, its Wild Impact attack can inflict 220 damage, which is crazy.

Overall, Koraidon is definitely going to turn the tables for the decks that would contain it. We can only say that it would have a huge impact on the market as we know it.

Miraidon is the second legendary unit that was shown in the trailer for the upcoming expansion. Miraidon is nothing less than a powerhouse with its Tandem Unit ability, which allows the player to look for up to two Basic Pokémon from their deck and put them on the bench.

Moreover, Miraidon will also have a high level of hp in addition to the Photon Blaster attack, which deals a whopping 220 damage. It is safe to say that the card will be highly sought-after and will dominate the TCG.

Another powerful EX Pokémon card that will be released with the Scarlet & Violet series is Magnezone EX. Its extremely powerful Energy Crush ability will inflict 50 damage for every Energy card attached to an enemy Pokemon.

In addition to that, Magnezone’s Pulse Launcher ability will be able to do 220 damage while also self-inflicting 30 damage. The card will probably be seeing a lot of competitive play and that will ultimately determine its value, which is expected to be quite high as the expansion progresses.

Lucario has been a popular Pokémon ever since its release in Generation IV. The EX variant of Lucario is expected to hold a dominant position in the TCG upon its release. Like all EX Pokémon, Lucario will have above-average hp and strong attack/defense.

Many players are expecting to add the card to their decks as soon as it comes out as it’ll be used repetitively in competitive play. The full extent of the card’s significance can only be determined after release.

Roaring Moon is an extremely strong Dragon/Dark-type Pokémon that will be introduced in the Scarlet & Violet expansion of the Pokémon TCG. Roaring Moon will have a high hp and powerful moves that will enable it to do insane amounts of damage.

Pokémon like Roaring Moon can greatly affect the TCG and have already started to make their mark.

Mimikyu EX can also be seen in the Scarlet & Violet series launch trailer. Mimikyu was first released in the Guardians Rising expansion and has since been featured on 15 different cards. The EX version of Mimikyu is expected to be its most powerful variant yet, making it the most sought-after as well.

Many of the newer EX cards are expected to have a major impact on the TCG and Mimikyu EX is one of the most anticipated ones in the bunch.

These are 6 of the cards that are expected to dominate the Pokémon TCG in 2023. As more information about the new expansion rolls out, we’ll be getting a deeper look into the value and usefulness of these Pokémon. But all in all, it is safe to assume that the reinvigorated EX mechanism gives some of these cards a huge edge over others in terms of playing value.